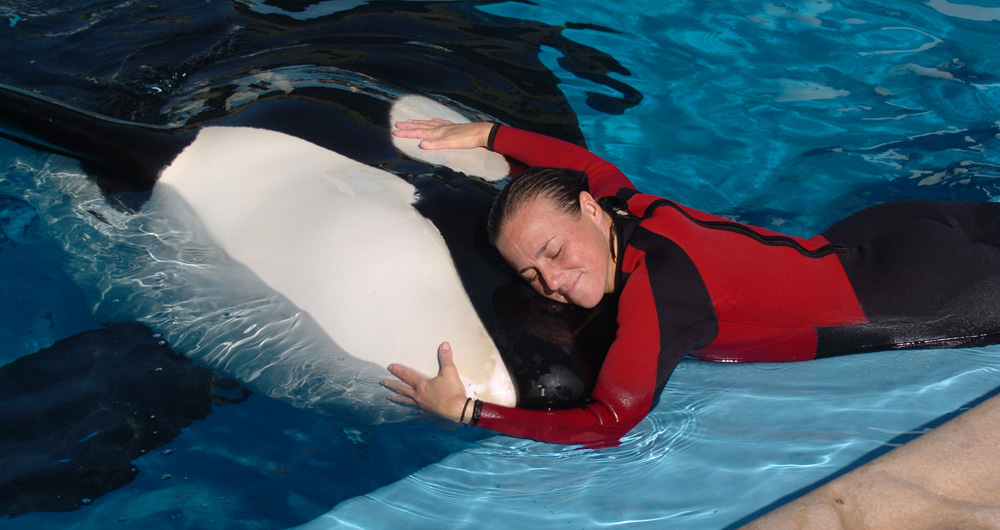 Since I first heard about the tragedy at SeaWorld, where the huge orca, Tilikum, killed his trainer, Dawn Brancheau, on February 24, 2010, I have been haunted by the story. I have felt Tilikum’s presence with me. Because I am a telepathic animal communicator, this is not just a thought that comes and goes. I have actually felt his spiritual presence with me.

From years of experience, I can sense when I am spiritually connected with an animal or person, and I can often tell what they are feeling emotionally. What I have experienced from Tilikum is an overwhelming amount of pain and outrage, which was exhibited by his violent behavior toward Dawn. This is an enormous animal, taken from his home in the wild, and subjected to life in a small tank and domination by humans.

What I have learned by communicating with Tilikum is that this anger and resentment that he holds is not just his own anger, but it is a conglomeration of the emotions of many captive orcas as well as other species held in the unnatural environment of SeaWorld and many other places.

As humans, we know that physical movement can help move emotions from our bodies. We also know that sharing our feelings with others can help release emotions as well. Tilikum, contrary to what some people might assume, is capable of experiencing the full range of emotions that humans experience. Tilikum does not have access to either option for releasing his emotions. He is kept in a small tank of treated water and does not have the freedom to interact with other orcas in a natural way if he chooses to do so. Those who hold him captive would like to believe that just because these animals express affection and perform on command, it means they are happy and all is well. This is not always the case.

I feel that Tilikum has felt a tremendous sense of outrage for a very long time. It is absolutely amazing to me that SeaWorld has continued to hold him as a performing animal, despite his having been implicated in the deaths of two other people. Is human life so cheap that they are willing to risk the life of beautiful young people, like Dawn, in order to keep the show going and to breed more orcas so that they too can perform? How much greed can this society bear, and where are the rules and regulations that would prohibit this kind of insanity?

And what role does Dawn play in this scenario?

What I know, from my communications with both Dawn and Tilikum, is that on a soul level Dawn and Tilikum made an agreement long ago, before this current lifetime, to honor the driving force behind both of them: to do all they could to let people know what a travesty it is to keep wild animals in captivity. For this Dawn gave her precious life.

Dawn absolutely loved the orcas that she worked with. This is how she was able to become such an accomplished trainer. But what she may not have known, in her conscious mind, was that SeaWorld was doing an enormous injustice to these animals by keeping them in this situation. She only knew that they performed for her and seemed to love her.

I can identify with this mentality, which is really a sense of denial. Like Dawn, for many years I too was not aware that I was contributing to the intense pain and resentment that many captive animals experience. I loved these animals so much, in fact, that I completed a veterinary residency program at University of California, Davis and the California Department of Fish and Game in zoo and wildlife medicine.

I thought I was helping the animals by being a caring person who only wanted to help heal their wounds and make their lives more comfortable. But I saw quickly in veterinary school how animals are exploited and neglected for the “greater good.” We learn from them, yes, but at what cost? Breaking a leg so that it can be fixed? Castrating piglets without anesthesia? By being part of the system, I was unknowingly contributing to it. (Note: I graduated from veterinary school in 1983, so some of these old practices are no longer being used.)

I have worked at other captive animal facilities, the worst being the primate research laboratories. Clean and tidy for the most part, but they promoted horrendous confinement and unnessary surgeries and treatments for monkeys, our close kin, all “in the name of science.”  I witnessed grievous exploitation and abuse of animals, but I do not want to go into the graphic details here.

Had I known years ago what I now know about the inhumanity of holding animals in captivity, and the appalling pain that many of them experience in these situations, I could not have done many of the things I had to do in order to be educated and trained to work with animals as a veterinarian, dog trainer, wildlife researcher, and animal behaviorist. Most people within the animal related professions have no clue about how the animals REALLY think and feel. And if they are aware of it, they have found ways to suppress their own feelings. It is simply too painful AND might require action to go against a system that perpetuates itself by viewing animals as somehow lesser than humans and therefore subject to our domination, exploitation, and yes, abuse.

I feel that Dawn sacrificed her life so that the truth of Tilikum’s situation would be brought to the light of public attention. She did love the orcas. And at a higher level, she was prepared to do whatever it took to let people know the truth of what is happening to these incredibly magnificent beings.

Let her life and her death not be in vain. Let us learn from this episode. Let people have the courage and passion to take action in order to provide for the release of these animals at places like SeaWorld and other captive environments. We have plenty of other ways to see animals. Technology today is awesome and we can be with animals on the big screen or on our own television sets at home. Does it really make any sense to watch an orca wave to the audience on command and think this is natural behavior? What are we teaching our children about animals and nature?

When Steve Irwin, the famous “Crocodile Hunter” on Animal Planet, was killed on September 4, 2006 by a stingray, he became a martyr. Of course, it was a terrible accident. However, did people fail to notice that Steve intimidated and pushed animals to violence over and over again on television? Again, what are we teaching our children about animals? That they are there for us to play with as we wish? That their emotions are not as important or real as our own?

And what about Roy Horn, of Sigfried and Roy? Another tragedy, when his own beloved tiger, Montecore, almost killed him during a performance on October 3, 2003. Was it really an accident? Roy had demanded that the tiger perform, the tiger refused, and when pushed, Montecore violently grabbed Roy and dragged him by the head.

Roy’s lions and tigers were kept in a gorgeous setting, seemingly had all they could possibly want, and worked with a man who adored them. But what we tend to forget is that these are wild animals, and they need things we cannot provide in a captive environment. They need space. They need to hunt. They need freedom and to exercise their free will. Otherwise emotions build up and they can actually go crazy. Rage without an outlet can only grow and eventually will probably be expressed in some way. Unfortunately, Roy was the recipient of this pent up anger. Fortunately he survived. Dawn was not as lucky. Or was she? I do not think I would want to survive a horror of this magnitude.

Bless Dawn. Bless Tilikum. Through this tragic drama they have given us an opportunity to really see what we do to these majestic animals that we claim to love. If we truly love them, isn’t it time to set them free?

I spoke with Tilikum and Dawn in September, 2013 after seeing Blackfish, 3 Â½ years after Dawn’s death. Tilikum is still at SeaWorld, still performing.

At a soul level, I am at peace. The physical being is another story. He is restless, frustrated, angry and hurt. In fact, the light has gone out. He simply survives.

The love you send is important.

I am at a very different place now, much higher and further removed from the human world. I still grieve for Tilikum and others like him. It is hard to watch. And yet I know that there is a higher purpose. Even so, it is hard. He and I are in communion all the time. He is now able to leave his body at will. This he has learned. And I am so grateful that this is possible. So he knows me and where I am and is aware of what we have done together. He regrets the violence but it was the only way he knew to get his point across and I was a full accomplice in this as well. It was not a pleasant way to end my life, but it serves a greater purpose and for this I am grateful.

Want to join the discussion?
Feel free to contribute!

Drs. Goodall and Dolittle, My Heroes

Message from Pegaso, a Lusitano white horse
Scroll to top